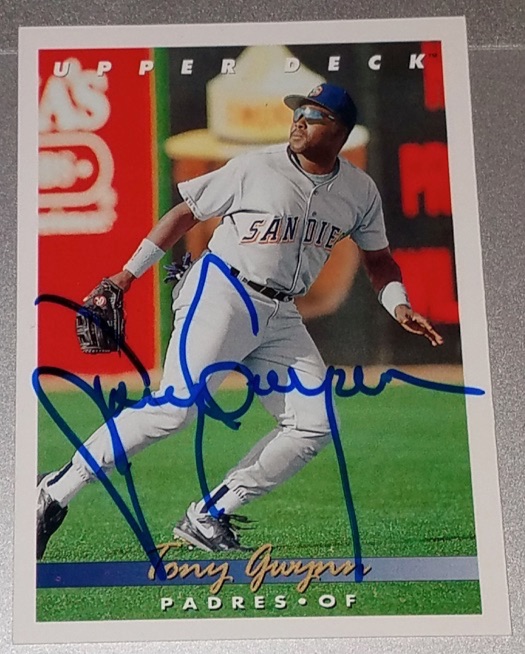 The baseball world lost one of the game’s greats today. Tony Gwynn passed away from cancer at age 54. I saw him play several times and was lucky enough to meet him once.

My buddy Jerry Shoemake and I used to go to Houston Astros games to get autographs when we were in high school (back in the Astrodome days!). We were hanging out at the visitors dugout and Tony Gwynn walked over from shagging flies in the outfield. He took my card from me and started signing it. He wrote the letter “T,” then looked up at me and noticed I was wearing an Astros hat.

He looked me in the eye and asked me, “Are you an Astros fan?”

I looked right back at him and said, “Tony, I’m a baseball fan.”

Tony laughed and said, “All right, I can appreciate that.” He wrote the letter “o” then stopped, looked at me and said, “But you didn’t answer my question. Are you an Astros fan?”

By this time, there was a large crowd gathering around. This had to be 1997 or 1998, and Tony Gwynn was already a first-ballot Hall of Famer by that time. People were pushing, elbowing, calling Tony’s name, and thrusting cards, balls, and bats in his direction. He never acknowledged them. He simply watched me and waited for my answer.

It was time to play ball. I smiled back and said, “I’m a Tony Gwynn fan!”

He laughed at that and wrote the letter, “n.” And then repeated his previous statement, “but you still didn’t tell me if you’re an Astros fan.”

This time I just said “yes, they’re the home team, so I root for them. But I love the game and following certain players.” He laughed and wrote the letter, “y.”

This went on for each letter of his name. We talked a bit, he signed a letter of his name, we talked some more. I honestly don’t remember much else of the conversation. I guess I was a bit star struck. I do remember that it took a good 3-5 minutes for him to sign my card. And I don’t believe he signed any others after our discourse (much to the chagrin of my buddy Jerry, who was patiently standing right beside me the entire time, and to the disappointment of the 30 other not-so-patient people clamoring for his attention).

Tony Gwynn has a beautiful signature. I’ve always liked it. But my signed Tony Gwynn card is the ugliest one I’ve ever seen. It’s squiggly, disjointed, and quite honestly, looks like a poor attempt at a forgery. But I wouldn’t trade it for anything.

(The card is shown below. If you look closely, you can see where the letters start and stop).

I always admired Tony Gwynn for how he played the game. He was fun to watch. He always hustled and he always had a smile. And his reputation was impeccable both on and off the diamond. He was a legend of the game, and by all accounts, just as well-respected by his family and peers. He was a class act and will be missed. RIP, Tony Gwynn.

Welcome to My Site!

I love helping people. In my day job, I help people learn more about personal finance and military benefits. But I also love sharing information that will help people save time and money - so they can live the life they want to live, without too much worry. Can I help you? Drop me a line!

Affiliate Disclaimer - As an Amazon Associate I may earn commissions from qualifying purchases from Amazon.com.